Last week, Education Reform Now CT released a report titled Less for More. It examines graduation rates from 22 of Connecticut’s 27 four-year bachelor degree granting programs as compared to similarly situated colleges elsewhere. While the report draws many conclusions, the overall theme suggests that many of Connecticut’s institutions of higher education are charging handsome tuition payments while not producing adequate graduation outcomes. Notably, the report makes the case that underrepresented minority students have some of the lowest graduation rates (for both four- and six-year completion), and that low-income students at Connecticut four-year colleges are presented with higher than average net tuition payments/debt.

The report is, in short, troubling; however, and sadly, it is all too reminiscent of another recent publication. 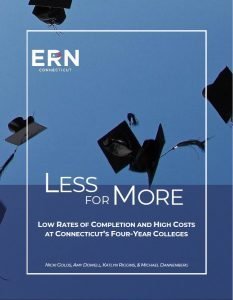 In 2018, TNTP released its report, The Opportunity Myth, which stated the following: “Far too many students graduate from high school still unprepared for the lives they want to lead. They enroll in college and land in remedial courses, or start jobs and discover they’re missing skills they need.” Less for More exposes this reality by bringing it close to home, thereby demonstrating that the opportunity myth is alive and well.

This is the narrative that ReadyCT is looking to change. It is our mission to advance academic excellence and career-connected learning such that every Connecticut K-12 public school student is equipped for college, career, and citizenship. We continue to believe that such a charge requires investment — investment in, among other things, innovative school design, visionary school leaders (particularly early career principals), and inspired, relevant learning, such as work-based experiences, which connect the classroom to the real world. Of course, any such investment will only work when our schools deliver an evidence-based foundation in literacy and numeracy instruction, thereby ensuring all students are reading and calculating at an age-appropriate level. Absent these fundamentals, we lose students, they slip through cracks, they aren’t offered adequate supports . . . and the myth persists.

We reject the idea that our students should have less for more and that the opportunity myth cannot be overcome. In doing so, ReadyCT pursues policy and programming in collaboration with business, civic and education leaders and stakeholders, and we remain interested in working with individuals and organizations who believe — as we do — that education is the ultimate engine of opportunity. Collectively, with thoughtful investment and proper focus, we see the possibility of more, and not less, for our students, as well as a chance to dispel the myth.