Connecticut has just tackled a projected $960 million deficit for the 2016-17 fiscal year. This shortfall meant cuts in every aspect of state funding, including a significant impact on the state’s education system.  The Education Cost Sharing (ECS) Grant, the state’s largest education grant, was cut $32.1 million which included a $6.8 million decrease in Alliance District funding. There were also cuts to magnet schools, the Priority School District program and the Excess Cost Grant allocation.[1] Such cuts will likely lead municipalities to provide greater contributions to funding the school district, requiring increases in local property taxes and/or a reduction in the school districts’ current levels of service.

While school funding is declining, costs to educate students are rising. In a recent government report on projected education statistics to 2023, current school expenditures are expected to rise 20% to $663 billion from 2010-2011 to 2023-24.[2] The number of our most at-risk students, who may require additional resources to meet their needs, is also growing. In Connecticut, the number of low-income students reached an all-time high in 2013-2014, with 37.1% of students qualifying for free or reduced lunch, an indicator used by the Connecticut State Department of Education to demonstrate economic need.[3] The connection between poverty level and educational outcomes is well-documented; without interventions, students living in poverty are at a greater risk of lower achievement and academic failure.[4] While beneficial, extra support for high-need student populations are costly and stretch already tight school budgets.

In addition, the number of students who have a dominant language other than English is increasing, particularly in Connecticut’s urban areas.[5] In the 2014-2015 school year, that number was 80,007 students, a 13.8% increase from 2010.[6] Of that number, 34,833 students were categorized as English learners based on their performance on language proficiency tests, interviews, and reviews of their academic records.[7]

Under federal law, students who are categorized as English learners are entitled to receive support services from personnel who are certified to provide these interventions. However, it is difficult for districts to find qualified personnel because Bilingual Education PK-12 and TESOL PK-12 are certification shortage areas. When districts do find such personnel, it is expensive to provide the mandated services for a growing number of students.

For students who are learning both the English language and skills/content information, this support is necessary to access the curriculum and to grow academically. Currently, our English learner subgroup’s scores on state assessments, such as the Smarter Balanced Assessment, indicate a significant achievement gap as evidenced by the chart below:[8]

The majority of Connecticut school districts are also facing the issue of declining student enrollment, with an average of a 6% decline in enrollment over the past 10 years and a projection of another 12% decline by 2025.[9] Declining enrollment is a concern for over three quarters of Connecticut’s towns.[10]

Although this change cannot be attributed to any one cause, there is evidence to suggest that a declining birth rate, diminishing employment opportunities in Connecticut, and the trend of having fewer children later in life are possible factors.[11] While the number of students enrolled in CT schools may decline, the administrative costs associated with running these schools does not. Districts are still faced with the same expenses for heating, cleaning, and maintaining large facilities, regardless of the enrollment size. This expense results in economic inefficiencies for school budgets. 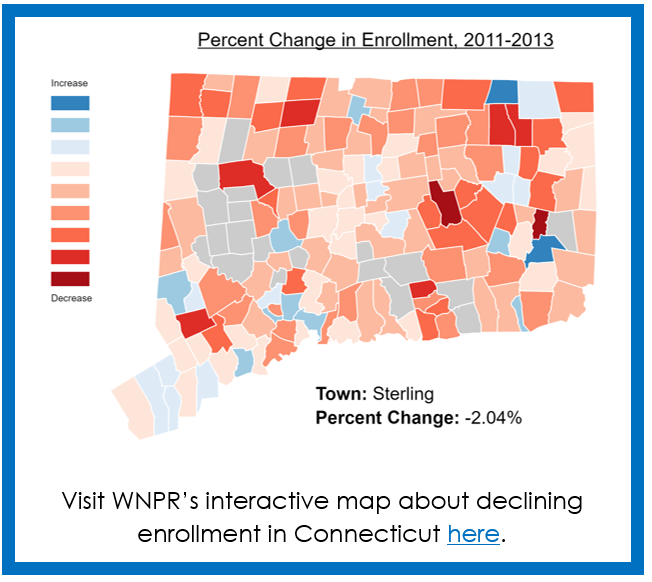 So how can a school district remain fiscally solvent in tough economic times while actively promoting instructional growth and improvement? There are several possible ways to address this dilemma.

One way to find cost efficiencies in school funding is to explore regionalization. In Connecticut, we have 169 public school districts and 17 regional districts.[12] Each public school district must fund administrative personnel and school staffs, school facilities, and educational supplies and services. When school districts regionalize effectively, they can eliminate the duplication of personnel and facilities, and increase their buying power. Although research about the impact of regionalization on student achievement is mixed, it appears to be successful in small, rural districts that are in close geographical proximity.[13]

Two little Connecticut towns, Norfolk and Colebrook, explored a merger of their districts in 2015. Both have small, declining student enrollments, and the districts already share a middle and high school. The merger was projected to save the districts $5.2 million over the next ten years.[14]

However, regionalization is about much more than saving money. School districts considering regionalization need to be philosophically aligned and agree on policies, course offerings, and other priorities. Citizens from both towns also need to agree that regionalization is what they want for their towns. In the case of Norfolk and Colebrook, the voters made the ultimate decision not to pursue regionalization of their elementary schools in a referendum.[15] Voters cited a variety of reasons, including the love and loyalty for their school, loss of autonomy, uncertainty regarding projected savings, and programming changes.[16]

Historically, Connecticut school districts have not embraced regionalization as a viable option even when the state has offered incentives to do so. The last regional school district was established in 1987 in Connecticut.[17] In 2012, Governor Malloy developed a school regionalization plan to provide financial incentives for small districts to regionalize. Any district with less than 1,000 students and per-pupil costs 10% higher than the state average would have lost state aid unless it found ways to regionalize.[18] That proposal was widely criticized and never implemented.[19] Similar state mandates across the country were unsuccessful.[20] State policies need to take into account the different socio-demographic characteristics of individual communities before mandating regionalization purely by size.[21]

Another cost saving approach is for districts to work together on cooperative purchasing agreements. For example, two or more districts might share the cost of services like human resources, worker’s compensation, health care, special education, professional development, or a program for gifted students. Some districts in western New York and Colorado have established a Bureau of Cooperative Educational Services (BOCES) to provide this assistance.[22]

According to a Shared Services Whitepaper created by The Connecticut Association of School Business Officials (CASBO), 94% of districts who responded to a CASBO survey on this topic indicated that they already participate in some type of shared service or partnership with another district, Regional Education Service Center (RESC), or their town.[23] The success of these partnerships may vary depending upon the districts involved and the areas in which they have established partnerships. CASBO’s whitepaper provides numerous examples of Connecticut districts, their partnerships, and the results of these collaborations.[24] Charles Zettergren, the President of CASBO and the Assistant Superintendent for Finance and Operations for the Rocky Hill Public Schools, remarked, “Our Shared Services Whitepaper identifies many areas where school districts have been successful in reducing costs or streamlining processes in serving the children and taxpayers of their communities. It is clear that benefits are most often realized when there is a collaborative relationship between the parties involved, planning takes place, and egos are set aside.” 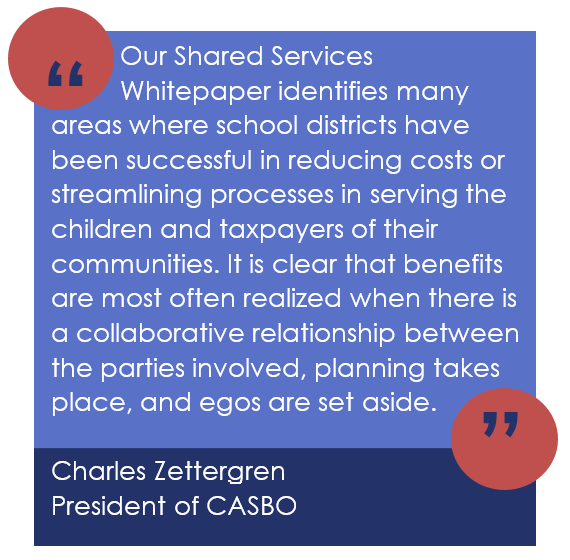 The non-partisan Municipal Opportunities and Regional Efficiencies (M.O.R.E.) commission has long advocated for regionalization for town and school district services as a means of reducing local taxpayer costs. There are currently two bills in the 2016 legislative session that are focused on incentivizing school districts to adopt a regional school calendar to lower transportation costs. There is also a bill to contract regionally for administrative services. Ellington, Somers, and Windsor Locks have a contact with the Capitol Region Education Council (CREC) for transportation for special need services which have resulted in an overall $140,000 in annual savings for transportation costs.[25] This type of savings can be realized by other districts who use the Regional Educational Service Centers (RESCs) to assist them.

Some Connecticut districts have had long-standing partnerships for specialized services. In Northwest Connecticut, Barkhamsted, Colebrook, Hartland, Norfolk, and Northwestern Regional District #7 are all members of the Cooperative

Education Service Center (CESC). They have each been provided specialized services, special education staff, and programming through shared service agreements for over 40 years. This partnership allows them to provide a wider range of services than each district could provide on its own.

School districts may want to consider working from the ground up when constructing a school budget. Rather than looking at the past year’s budget and tacking on a 3% increase for inflation, it might be useful to begin with the assumption that every item in the budget must be justified for its relevance to the district’s mission and goals. For example, if a Grade 3 class size has always been 18, consider whether there would be savings if the class size was increased to 20, and whether those savings are justifiable. Would increasing the number of students in a classroom impact the learning of those students? Looking at the research, the curriculum demands, and the needs of the specific group of students would help to inform that decision. When school budgets are constructed annually using this methodology, all expenditures–from human capital to school supplies–are determined to be essential and worthy of the financial commitment. Zero-based budgeting may be more time-consuming and complex than incremental budgeting, but it may also be helpful with allocating scarce resources when overall spending must be reduced.[xxvi]

Although not a popular option in most communities, closing a school and consolidating students can be an effective cost saving measure when school enrollments are down or a facility needs expensive renovations to remain open. With declining enrollments, it is not always fiscally responsible to keep schools open to serve only a small number of students. While many parents prefer to have their children in a neighborhood school, consolidating schools can sometimes result in benefits for students with better facilities, more curriculum offerings, additional afterschool programming, and opportunities for enrichment. A recent Fordham study of school closings in Ohio concluded that student achievement actually increased for students who were displaced when their low-performing schools were closed; this is because they were forced to enroll in higher-perform schools that could better meet their needs.[xxvii] So there may sometimes be educational and economic benefits to closing schools.

There are many ways for districts to economize in difficult times and preserve the quality of their programming. Districts must determine which solutions will work best for them. There is no “one size fits all” approach.

[22] Boser, U.(2013). Size Matters: A Look at School-District Consolidation, p. 9. Retrieved at https://www.google.com/webhp?sourceid=chrome-instant&ion=1&espv=2&ie=UTF-8#q=size+matters%3A+A+look+at+school-district+consolidation.