The Engineering and Science University Magnet School (ESUMS) is a public college preparatory middle and high school in the New Haven Public School District, and it is producing some impressive results with its students. When the results of the 2015 Smarter Balanced Assessment came in, we quickly realized that the ESUMS students had outpaced the state and district in both English and Math. 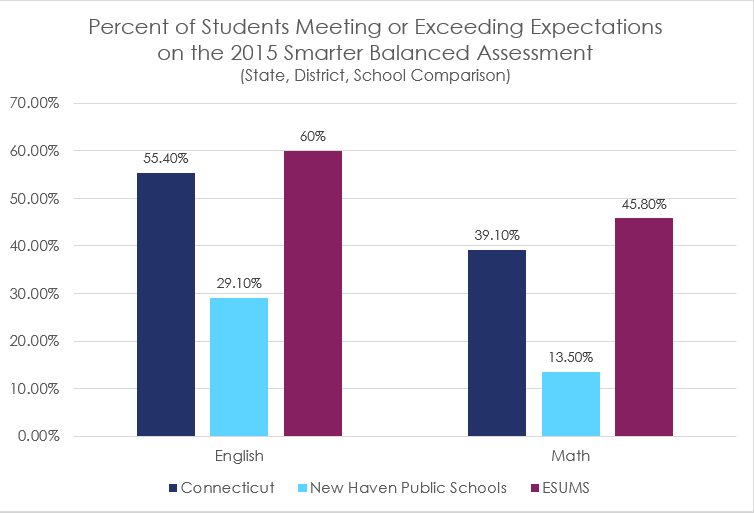 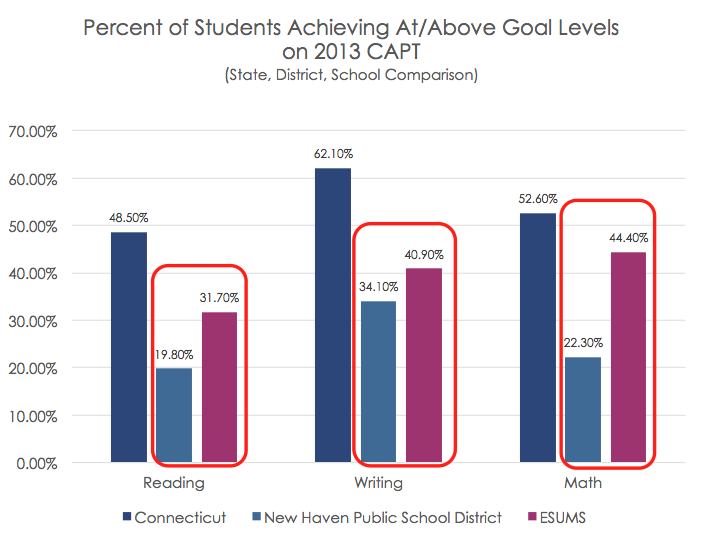 Intrigued by the SBAC results, we were determined to delve a little deeper into the data. On the 2013 CAPT test, although ESUMS did not meet the state average, its students still did outperform the rest of the district.

Indeed, a look at longer-term results for the grades that ESUMS has continuously served* reveals that while the district of New Haven tends to perform lower than the state average, ESUMS has consistently outperformed the district, and

sometimes even the state. Moreover, ESUMS results for
several years and subjects seem to indicate a general upward trend.

Almost half of ESUMS students come from the New Haven public school district, with enrollment also open to surrounding towns. 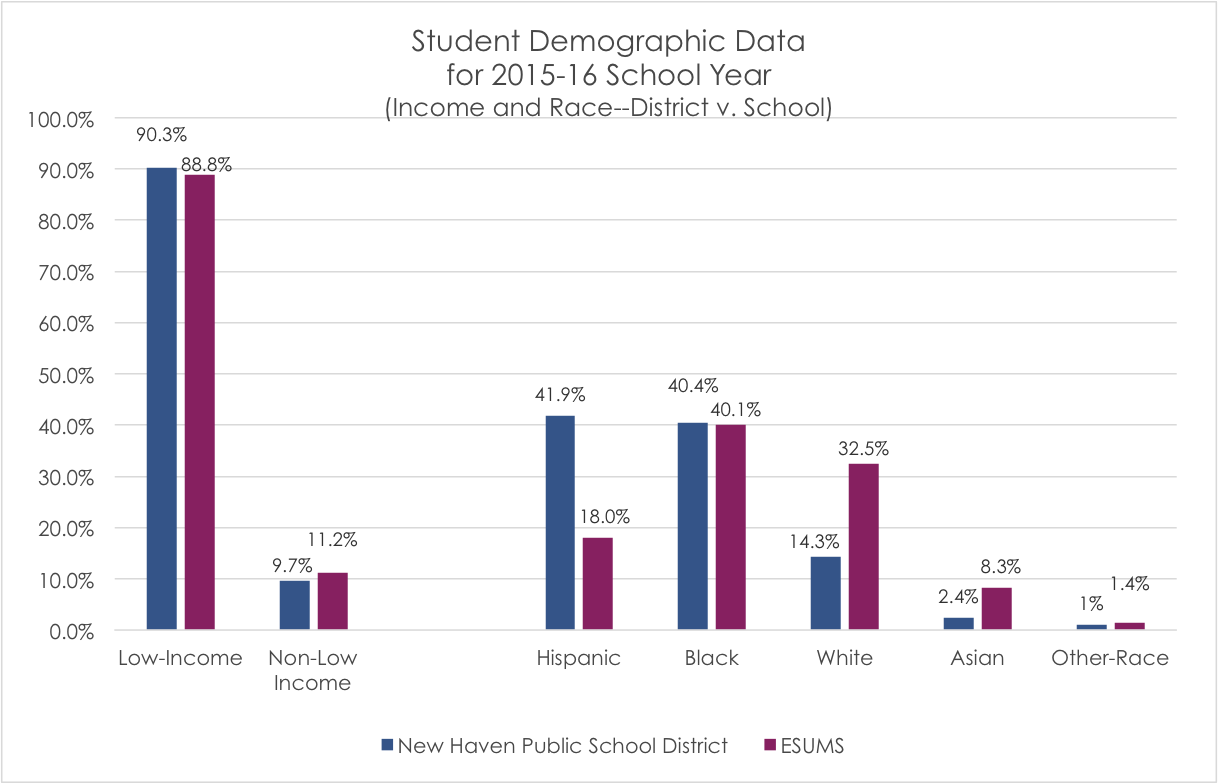 Like the rest of the New Haven Public Schools, the vast majority of students at ESUMS come from low-income families.

So what exactly is going on at ESUMS that is producing such noteworthy results? We visited the school to find out more.

Whether dealing with curriculum or culture—everything that goes on in the school is based upon the principle that all children can achieve at high levels if you set high expectations. And that seems to be bearing out.

ESUMS prepares its students for STEM programs at the collegiate level through a “hands-on and minds-on” philosophy. We heard from a variety of educators and students that what primarily distinguishes this school is its level of rigor, and a core belief that all students can achieve at high levels. Using project-based learning to address real-world problems in a meaningful way, teachers become “facilitators” who guide students to become problem-solvers.

A former private school educator, Principal Medria Blue-Ellis says that she seeks to bring the same culture of high expectations you find in private schools to the ESUMS public school. For example, she says that when she taught at Hamden Hall, her students would read 20 books a year. In contrast, a public school district might require a minimum of four books to be read. “Kids need to read more books than that,” she exclaims. “They need exposure to a variety of authors—authors of color, classics, different subjects and styles. Some schools will have students reading A Tale of Two Cities for six months straight. But we want to add more variation. That gives each kid an opportunity to connect with something in Language Arts. It also means that if they aren’t enjoying a book, they don’t need to check out for the whole term.”

Appreciating that students are individuals is a common theme for Principal Blue-Ellis. “Students are regular people,” she observes. “We all enjoy different things. We all have our strengths. We all have our bad days.” For her, ESUMS is about “inviting” the students to learn by exposing them to meaningful problems and building their problem-solving skills.

ESUMS sets high academic standards, providing students with access to honors and Advanced Placement courses. The school has developed partnerships with the community and neighboring higher level academic institutions—in an effort to grant students access to individualized and varied experiences. Starting in 10th grade, some students can begin to take college courses and tutorials through the University of New Haven.

For engineering courses, ESUMS offers the Project Lead the Way curriculum, which provides problem-based STEM activities for students and professional development for teachers.

When we visited Ms. Manzione’s high school Commerce Class, students were divided into business groups that worked together to create online websites to sell herbs and spices from different countries around the world. Ms. Manzione used to work on Wall Street before joining ESUMS, so she brings a wealth of knowledge and passion to the classroom as she facilitates projects that will help students become business savvy. This year, her classroom produced one of six ESUMS teams in a year-end competition known as “ExpoFest”. On our visit, we saw Ms. Manzione’s students diligently working toward the 2016 Expo – conducting SWOT (Strengths, Weaknesses, Opportunities, and Threats) analyses and building business plans.

In the May Expo, students from Connecticut schools presented interactive exhibitions and were judged by a panel of business professionals, higher-education faculty, and experts in science, technology, and business. ESUMS students took first place in the Technology Challenge at ExpoFest for their development of a mobile app, MT4D, that connects individuals with disabilities to appropriate transportation services. The ESUMS MT4D team was also the state winner in last year’s Samsung Solve for Tomorrow Challenge. (See video below.)

We saw similar levels of meaningful, experiential learning with real world implications in Mr. Lee’s 7th grade Engineering class. There, we stumbled upon students creating their own payrolls as part of a group project. A retired engineer from United Illuminating, Mr. Lee noted that—in addition to engineering and science—this project is also allowing students to practice their math skills as they conduct the business-end of their projects. To Mr. Lee, the best parts of working at ESUMS are “giving students the ability to perform” and challenging their learning thresholds by always promoting imagination and investigation. (Click here for a look at excerpts from the blank Autodesk workbook that Mr. Lee has created for his students. And see samples from a student’s filled-out workbook below.)

We saw project-based learning being used throughout the school. Mr. Pinsker used to work in product design for Revlon, so he has his 6th grade Engineering students designing hair brushes. As we walked through his classroom, some students were building 3D models on computers, while others were studying design prototypes and grading themselves on a self-rubric. Mr. Pinsker says he teaches computer skills as they are needed for projects. This gives the skills he is trying to build relevancy for his students. For an upcoming project, he plans to teach 10 days of Excel.

Often, project-based learning at ESUMS leads to students entering into state and national contests, such as ExpoFest. Students will collaborate on group projects, compete for the presenter role, elect a presenter, and work together to coach that presenter for even better results in the competition. According to Principal Blue-Ellis, when classrooms undertake such ventures, they don’t cherry-pick which students will enter; all students in the class will submit entries. And the school boasts a history of impressive victories.

High Expectations for Students and Educators

Principal Blue-Ellis explained a philosophy of “shared leadership” at the school. She has high expectations for her staff, but she also wants them to work with her on making ESUMS a special and meaningful place. To her, that means that ESUMS doesn’t necessarily have to do everything “in the traditional way,” but rather has to find ways to ignite the passions of both teachers and students. Principal Blue-Ellis is happy to think outside the box, to hear and support her teachers’ ideas so that they feel excited within their own classrooms. As an example, she mentioned that one of her teachers has recently come up with the idea of providing a Flight Certification course. That’s pretty unconventional. But from Principal Blue-Ellis’ perspective, the presentation of a new idea just means it’s her job to collaborate with staff, and figure out the logistics so that they can make this dream a reality.

She says that everything in the ESUMS environment should be focused upon teaching and learning. We saw several students walking and working together in the hallways. Their demeanor was very relaxed, but they were clearly on task. Passing staff were focused not on compliance, but on whether the students were developing responsible behaviors for any setting. “All things at ESUMS are driven by the question: What will support teaching and learning?” says Principal Blue-Ellis.

The climate at ESUMS is warm and welcoming. According to the principal, teachers and staff rely upon non-violent communication and “Restorative Practices” to build community, promote dialogue, and develop understanding about what behaviors are acceptable. When a conflict arises, teachers are encouraged to shift away from punishment-based thinking, instead using classroom circles in which the community can discuss how things can be made right again. Principal Blue-Ellis says these practices are so effective that many teachers have taken them home with them—making them a part of their own lifestyles and introducing them to other adults.

The core values at ESUMS are:

Despite the emphasis on flexibility and community, teachers are still constantly monitoring what’s going on. Principal Blue-Ellis told us that teachers regularly monitor student data in Professional Learning Communities. But giving data the

appropriate level of attention is a balancing act. Although data needs to be monitored regularly so that educators can make sure their students’ needs are being met, the ESUMS Principal says she tells her teachers, “Don’t worry about scores. Worry about experiences.”

The philosophy in the school is that when students are enabled to take challenging courses and practice their skills in meaningful ways, their abilities will be borne out on assessments. “In some schools,” Principal Blue-Ellis says, “students might not even have the opportunity to try. Here, we want everyone to have an opportunity, and their peers serve as good role models to promote engagement.”