The Bloomfield Blueprint for Closing the Achievement Gap

One of the most challenging issues in American education today is that not all of our nation’s children are educated equitably. Commonly referred to as the “achievement gap,” this problem often becomes apparent when comparing the achievement of groups of students that differ in socioeconomic status, race, language, or special learning needs.

To mitigate these differences, a “one size fits all” educational experience no longer works. Narrowing these gaps is extremely difficult work because there are so many different variables to address.

Connecticut, historically, has had one of the widest achievement gaps in the nation. Reducing the achievement gap and accelerating progress may seem daunting. However, tangible and encouraging progress is occurring in Bloomfield Public Schools under the leadership of its Superintendent, Dr. James Thompson, Jr. This suburban district has a student population that is 90 percent African American or West Indian and 50 percent low-income. Bloomfield created a blueprint to narrow and eventually eliminate the achievement gap–and its four-year trajectory of student performance proves that it’s working.

Bloomfield has realized significant improvements in reading and math performance between 2011-2014. In fact, third grade scores in Reading, Writing and Math all exceeded the state average in 2013 (the last time that the assessment was offered statewide). 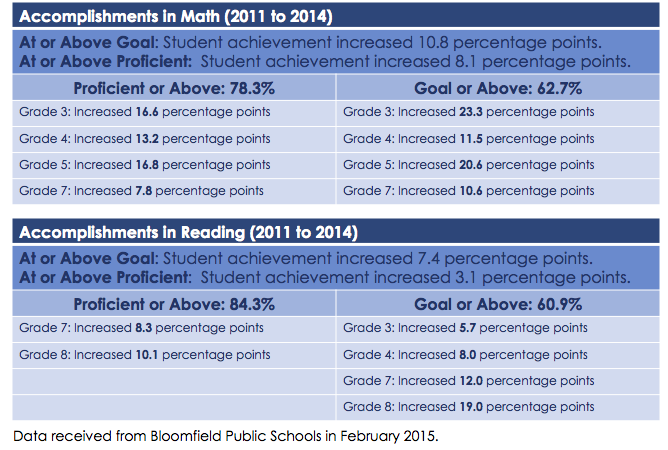 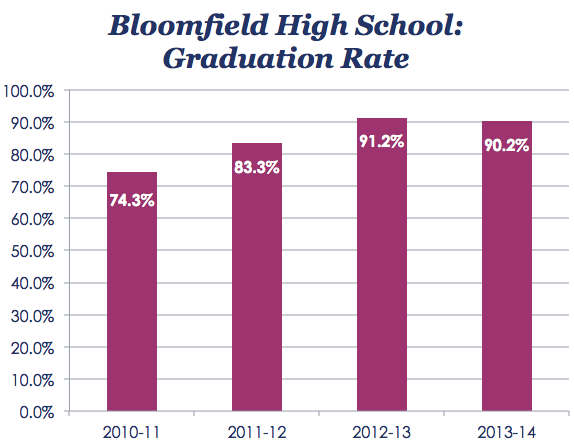 So how is it all happening? Bloomfield Public Schools has carefully created a District Accountability Plan with four major priorities to guide the daily work in the district. There is focused attention from every staff member, starting with the Superintendent. This is no quick fix. Like most real solutions to real challenges, it takes commitment and collaboration.

Click on the buttons below to learn about Bloomfield’s Four Major Priorities.