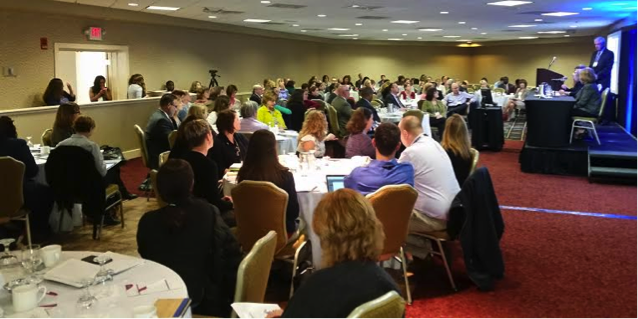 New Haven, Connecticut – On Tuesday, October 21st, the Connecticut Council for Education Reform (CCER) hosted an event designed to help leaders of schools and the PTA work together on communications about the Common Core State Standards. The event was co-sponsored by the CT PTA, CAPSS, CABE, CAS, and ConnCAN.

There were over 120 attendees, representing parents and educators from over 25 Connecticut districts, the Connecticut State Department of Education, and policy and thought leaders. A keynote address by Otha Thornton, President of the National PTA, addressed the distinctions between standards and curricula, as well as the importance of common standards between states in our increasingly mobile economy. A panel—comprised of CAPSS Executive Director Joseph Cirasuolo, Branford Superintendent Hamlet Hernandez, Meriden teachers Marjorie Eager and Angela Fragoso, and Chief Academic Officer for the CT SDE Dianna Roberge-Wentzell—engaged the audience in an open and honest dialogue about the practical realities of implementation. Then, the event concluded with an exciting segment on communications strategies, led by KNOWN Branding’s Jeff Turner.

Reflecting on the event, CCER Executive Director Jeffrey Villar said, “The Common Core State Standards are an important part of our nation’s future. This event was designed as an opportunity to bring district, school, and PTA leaders together so that we can make sure we get implementation done properly, and so that we can start thinking about how to better include parents and communities in that work. I think this venue was a great first step in that collaborative effort. After all, one of the main purposes of Common Core is really to assure families that the time students spend in school will be time well spent on preparing them to succeed in the future.”