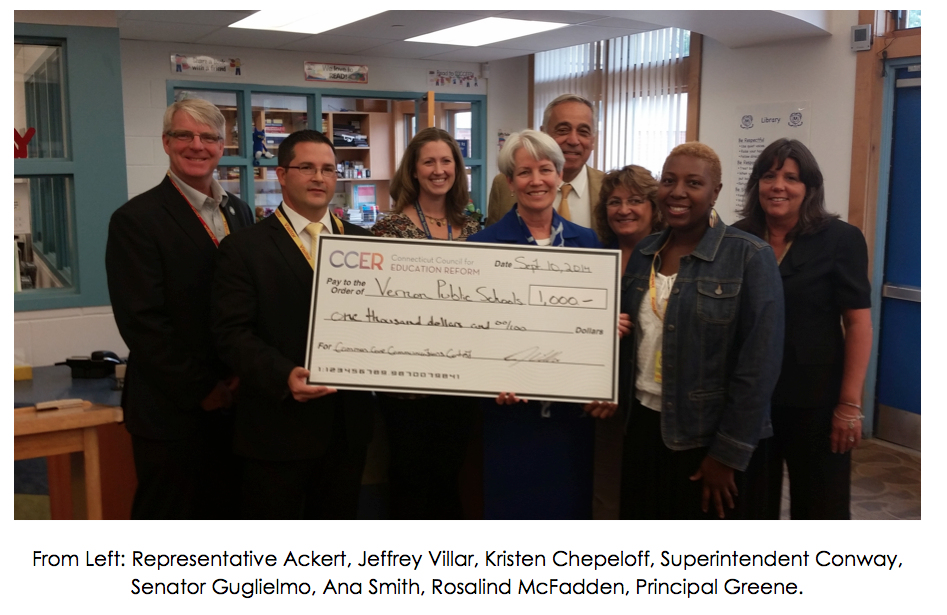 New Haven, Connecticut – Today, September 10, 2014, the Connecticut Council for Education Reform (CCER) announced that Vernon Public Schools has won CCER’s Common Core Communications Contest. The contest was designed to showcase the creative and effective methods that districts and schools have used to communicate with parents about the Common Core. Vernon is one of only three winners.

The announcement was held at the Northeast Elementary School Library, and was attended by State Representative Tim Ackert, Senator Tony Guglielmo, and staff from Vernon Public Schools. Vernon teachers Kristen Chepeloff and Ana Smith talked about the importance of the Common Core State Standards in their classrooms. Vernon parent Rosalind McFadden described how the new standards were allowing her daughter to make sense of the material she learns in school.

CCER Executive Director Jeffrey Villar said, “Vernon stood out because they have taken great pains to make information about the Common Core accessible to parents and the community. They have shared information at family nights, town hall events, and workshops, and they’ve posted on Facebook and YouTube. They have made it a top priority to include parents in this implementation effort, and that type of collaboration is part of what will make Common Core a success.”