What is Student-based Budgeting?

In the past, we’ve talked about the need to overhaul how Connecticut funds its public schools. Across the country, policymakers and educators are thinking about how we can do a better job of allocating money to schools.

Under the traditional funding model, resources are distributed to schools in the form of staff and dollars that are earmarked for specific purposes. Often, this distribution is based upon formulas that allocate staffing positions based upon the number of students at each school. Although this method of distributing resources to schools was likely designed initially to be fair, it shortchanges our neediest schools and creates several problems:

Student-based budgeting (sometimes called “money follows the child,” “weighted student funding,” and “fair student funding”) attempts to solve many of these problems by shifting the focus of allocation to students’ needs, rather than strict staffing ratios.

In the student-based budgeting model, districts allocate dollars to schools (rather than staff), based upon the number of students enrolled, and weights are provided for specific types of students based on need. 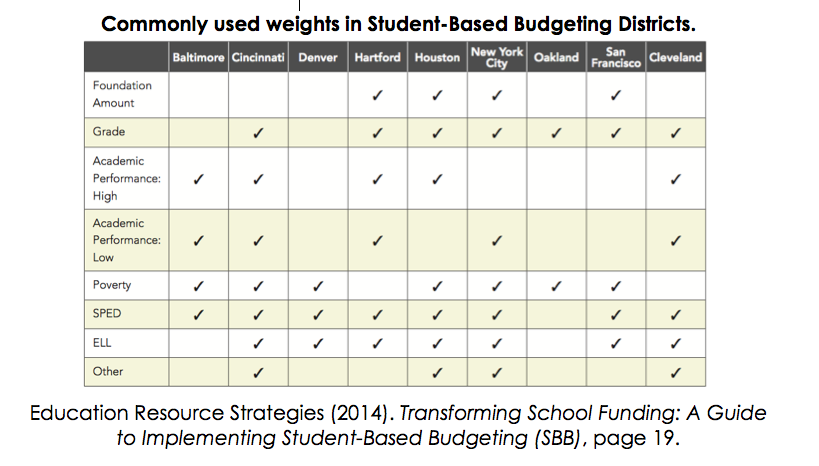 When it’s well-implemented, a student-based budgeting system should result in greater equity and transparency, and it may also result in greater flexibility for school leaders if it gives them high levels of autonomy over their own budgets. This allows them to be more innovative and to spend their resources in a manner that is aligned with the needs of the students in their school.

Although this funding system is not a panacea, it can play an important role in a comprehensive strategy for district improvement. For examples of districts that have implemented student-based budgeting as part of a district improvement plan, see: Houston (implementing student-based budgeting since the 2000-2001 school year); Hartford (since 2008-2009); and Cincinnati (since 1999-2000).

However, at the end of the day, Connecticut must still address the inequitable funding between districts if it is to truly fix the way that we pay for public education.