So we’ve discussed the origins and purpose of Common Core.

One of the primary areas of confusion surrounding the Common Core is the difference between curricula and standards. This has led to the misconception that the Common Core standards are a national curriculum. In truth, a standard is the guideline from which a curriculum is developed. While standards are broad, a curriculum is specific. The curriculum specifies the units and pacing of instruction, and the assessments that teachers will use to instruct the basic skills and information that students need to learn from grades k-12. It is a sequential road map for teachers to follow so that they can be certain that students reach the goals articulated by the standards as they exit each grade level.

Although we have statewide standards, each district can select a different way to design its curriculum to teach the standards. They can also identify and select a variety of different materials and resources that meet their curricular goals. In addition, once a district creates a curriculum, teachers then have the ability to devise their own lessons to teach that curriculum.  With the Common Core standards or any previously adopted state standards, teachers still have the freedom to use their creativity to develop engaging lessons to reach their students. The Common Core does not limit teacher autonomy or ingenuity as they develop lessons to teach students.

Now, a school or district could go about implementing this standard in any number of ways. The standard merely describes the skill that a particular piece of the curriculum should be helping students to achieve. Here are two examples of how different districts might approach this same standard in different ways (both of which are aligned to the Common Core). 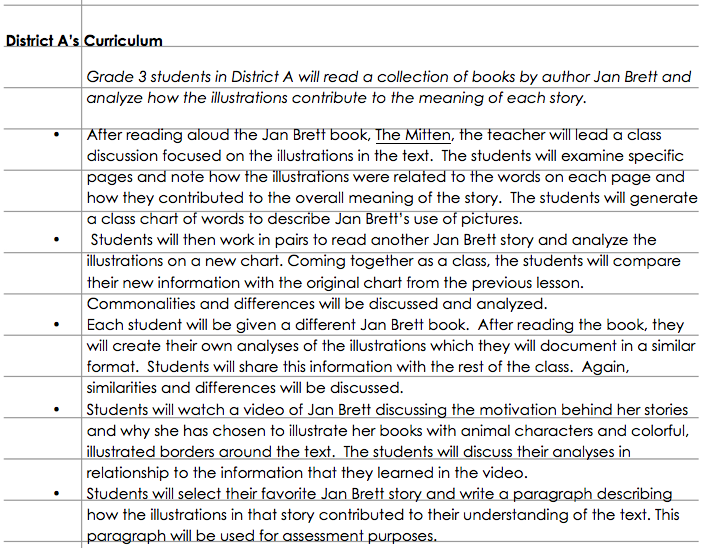 Compare that with another piece of curriculum aligned to the same standard: 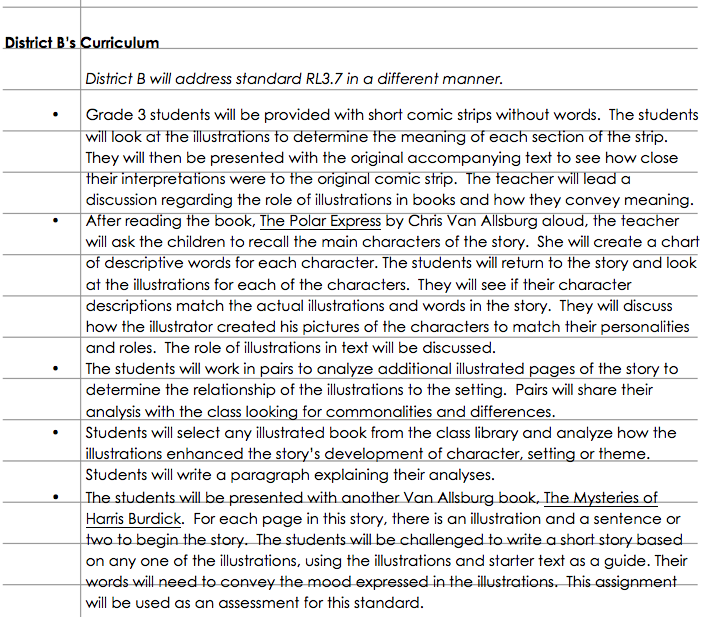 These condensed excerpts of curricula illustrate that the same standard can be taught in many ways using different resources. No matter which curriculum a teacher is using, either is designed to help the students master the skill described by the standard.

In both of these examples, the Common Core requires students to delve into text and analyze an author’s craft in a more authentic manner.  Finding evidence from the text, and in this case, from the illustrations, is an important component in the Common Core.  Reading, writing and speaking need to be grounded in evidence from the text for both literary and informational works. These processes are also connected in curricula, as is evident in the examples.

Using a gradual release of responsibility teaching model, the students are actively involved in their subject matter, interacting with one another and learning by doing.  The teacher is no longer expected to be the “sage on the stage”, but rather a “guide on the side” facilitating learning.  The Common Core creates “thinkers” and “doers” who are not just searching for the one right answer, but are using their intellectual abilities to construct appropriate responses to various challenges.

So how did this work before Common Core?

(1) While Connecticut did have standards before the Common Core, the bar for a comparable standard might not have been raised as high.

(2) If a comparable standard did exist, it only existed at the state-level. This means that if a third grade student in our state moved to another state, he or she might not have been prepared at the same level as entering fourth graders in that state.

(3) Also, before Common Core, even a similar standard would have been taught differently because Common Core–aside from setting expectations for students–also outlines instructional shifts for pedagogy in the classroom.