The Equalizers? Preschool Slots and a Quality Rating System

“One of the best investments we can make in
a child’s life is high quality early education.”
– President Barack Obama, 2014 State of the Union

In his State of the Union Address last week, President Obama highlighted high-quality preschool as a top priority for 2014. Indeed, at CCER, we think that believing in the American Dream means acknowledging that all students deserve to start school on equal footing–regardless of race or family income.

This year’s publication by The Annie E. Casey Foundation shows that nearly two thirds of children in the U.S. are not reading at grade level by fourth grade–during which time they should already be transitioning from learning how to read to using reading to learn other subjects. The study also finds that the gap in reading proficiency based on family income is highest in Connecticut, Massachusetts, Rhode Island, and Illinois. Could high-quality preschool be one way of equalizing the playing field for those children who haven’t been lucky enough to start out in equal circumstances? 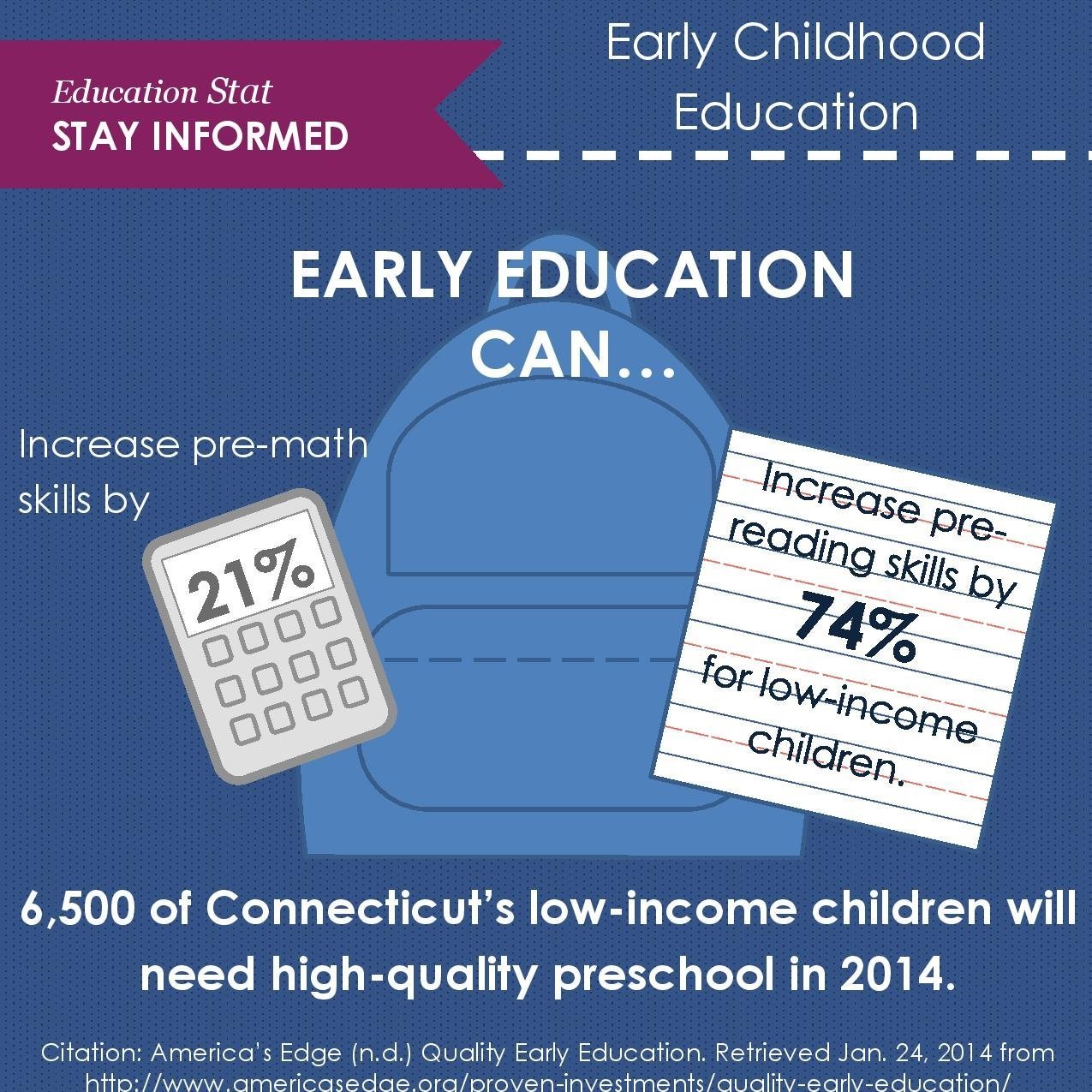 For low-income children who are sometimes not exposed to the same early stimuli as their more affluent peers, preschool is an important opportunity to catch up on early-age cognitive and social development before kindergarten begins. This year, Connecticut is taking a positive stand on the importance of providing high-quality preschool programs. And it is in good company, as the federal government is making it an education priority as well. Backed by both Republicans and Democrats, the White House is pushing for greater availability of early childhood programs, and cumulatively, states are spending $400 million more yearly on early education programs than before the economic crisis.

In FY 2012-13, Connecticut did fund 1,000 new slots for school readiness programs. However, CCER estimates that there are roughly 6,500 additional low-income students without access to a quality preschool experience in Connecticut. That’s why, this year,CCER is calling for 500 to 1,000 additional high-quality preschool slots in the FY 2014-15 budget for low-income children.

Quality Matters as Much as Quantity!

Providing the opportunity for low-income students to attend preschool is a great first step, but we need a Quality Rating and Improvement System (QRIS) to ensure that the programs are high-quality as well! Research shows that high quality programs with strong teaching, qualified teachers, and small group learning yield the most significant cognitive gains for children.

QRIS can help to increase consumer awareness and access to higher quality early childhood programs. If you were a parent looking to enroll your three-year-old in preschool, wouldn’t you want to know which preschool was of a high enough quality for your child? As the Department of Health and Human Services’ Office of Child Care (OCC) explains, a QRIS is a systemic way for the state to communicate the quality of preschool programs to parents and the public, based upon certain standards.

The OCC found that most states use licensing standards as the base of a QRIS, and then build higher levels of quality standards on top. (The number of tiers is up for debate: Many states have two; while, the National Association for the Education of Young Children (NAEYC) calls for three tiers “in order to provide a continuum that sets clear benchmarks of quality that build upon each other.”)

Regardless, a QRIS must be based upon a set of standards–criteria provided by the state that an early childhood program must meet in order to move from tier to tier. Then–as the National Infant & Toddler Childcare Initiative (NITCCI) suggests–the QRIS must establish accountability measures for programs that don’t meet the standards, professional development and supports, and incentives for participating programs that excel.

According to Connecticut’s (failed) 2013 Race to the Top-Early Learning Challenge federal grant application, the State is working to finalize such standards, which should be aligned with incentives to move providers from a lower tier to a higher quality tier.

So what do these incentives look like? The NITCCI calls for financial incentives such as bonuses and/or wage supplements for practitioners, or tiered reimbursement systems that support the higher cost of maintaining higher quality programming. The NAEYC supports financial incentives as well as non-financial, but points out that any incentives should be tracked by the QRIS–so that we can determine which incentives are actually linked to improvement in quality.

Today, there are at least 25 states, plus the District of Columbia, that have implemented a QRIS. If all these states are implementing a QRIS, shouldn’t Connecticut be one of them?

You can view the NAEYC’s clickable list of states with Quality Rating and Improvement Systems here.