What the NCTQ Teacher Prep Results Mean for CT

Having an effective teacher is the most important factor in student achievement, but there seems to be little consistency in how we train teachers, according to a new study by National Center on Teacher Quality (NCTQ).  The NCTQ Teacher Prep Review came out recently, rating teacher prep programs from 1,130 academic institutions across the nation.

The institutions were rated on different categories such as how selective they were in admissions, the effectiveness of their student teaching programs, the strength of their curriculum and classroom management programs, and whether the institution tracked the effectiveness of their graduating teachers. Overall, the report’s findings are dismal.  Less than 10% of all programs earned three or more stars on the four-star rating scale.  Only one institution in the entire country earned more than three stars for both an elementary and secondary program (Ohio State University).

The programs rated by the report produce 99% of traditionally trained new teachers, which means what they teach effects many of our nation’s most vulnerable youth. The average first year teacher tends to be assigned to students who are already behind grade level.  Too often these children are low-income and students of color.

Connecticut’s ratings wavered between mediocre and terrible.  While none of Connecticut’s 29 rated programs received a “Consumer Warning” for earning less than one star, only the graduate secondary program at Southern Connecticut State University received 3 out of 4 stars, placing them on the Teacher Prep Review’s Honor Roll.  We may not be the worst in the nation, but we are far from being the best. Here’s how Connecticut stacked up nationally: 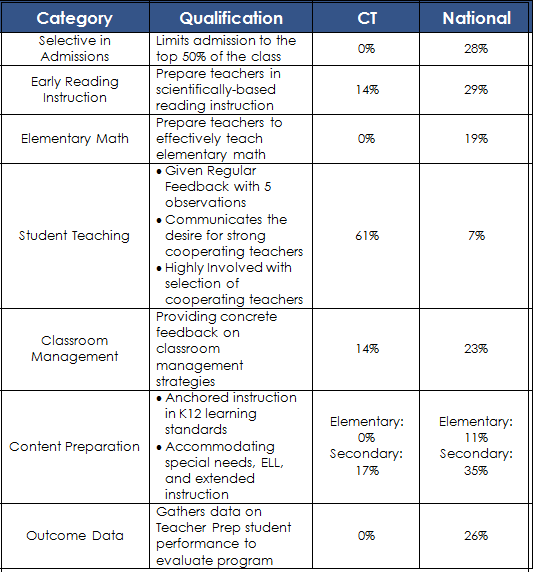 The state does worse than the national average in every category except for student teaching.  Even this uncharacteristically high rating is not as positive a sign as one might think.  Under the rating system, the NCTQ did not penalize Connecticut’s teacher prep programs for not playing a role in selecting cooperating teachers because the programs are prohibited from doing so by Connecticut state law. A note in the report leads us to assume that our rating would be significantly lower without this exception.

The NCTQ has created a number of recommendations for prospective students, current students, rated institutions, and policymakers.

The report urges individuals to raise awareness of the Teacher Prep Review ratings in an effort to try to influence change.  Prospective students should make highly informed decisions about the programs to which they pursue admission.

The Teacher Prep Review included a number of policies recommendations for the entire nation. Earlier this year, however, NCTQ gave Connecticut-specific recommendations in a State Teacher Policy Yearbook. These included:

NCTQ believes that by raising awareness of the serious deficiencies in teacher preparation programs, we will be able to make positive changes that will result in better-prepared teachers in the future. These changes need to be made soon.  Every year, between 1,000-2,000 new teachers walk into Connecticut classrooms for the first time. These teachers need to have the confidence and support to ensure that every child is receiving an exceptional education—without exception.