Not long ago, we discussed the need for a framework for intervention in Connecticut. However, as the expression goes, “the Devil is in the details.” Working through the nitty-gritty issues can make building an intervention system for school turnaround appear to be a daunting task. That’s why it’s helpful to look at some of the exciting frameworks and approaches that other states have successfully embraced and to think about how we can learn from their efforts.

State Models That Impress Us

In 2011, the Delaware Department of Education launched the Partnership Zoneto dramatically improve the lowest-achieving schools in the state. The schools were selected based upon both a quantitative analysis to determine which schools lacked progress in reading and math assessments and a qualitative analysis by Secretary of Education Lillian Lowery, with input from stakeholder groups. Schools in the Partnership Zone are grouped into clusters of three to five schools and supported by a “Lead Partner,” which is an organization that provides schools with support and coordinates the turnaround efforts. School-level leaders in Partnership Zone schools are given the freedom to make staffing, scheduling, curriculum and related decisions, in return for being held accountable for dramatic student achievement gains within two years.  Delaware currently has ten schools in the Partnership Zone, which are all supported and monitored by Delaware’s School Turnaround Unit.

Since 2003, Louisiana has carved out a school district especially for low-achieving schools, known as the Recovery School District (RSD).  A school is assigned to the Recovery School District when it is identified as failing for at least four years and fails to comply with, or make progress toward, the implementation of its recovery plan.  When this occurs, top school leaders and teachers are identified to operate the school and to lead the process of transformation, with oversight by the State Board of Elementary and Secondary Education. Currently, 66 RSD schools are open in New Orleans.

Kudos to Delaware and Louisiana for taking the initiative to develop these successful models!

The Most Impressive Model – Massachusetts

A model that we’re particularly impressed with, and that has already resulted in gains in student achievement, comes from our neighbor to the north, Massachusetts. 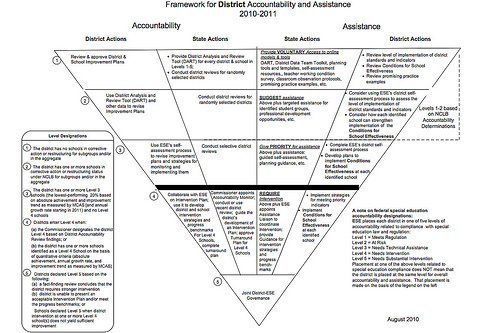 Massachusetts has a 5-tiered turnaround model, which elegantly answers the question: “Of the lowest performing schools – which are the most ‘stuck?’”

The model in Massachusetts is exemplary because it articulates a clear standard for identifying which schools and districts perform poorly on a number of academic indicators and which schools and districts are not showing any improvement from year-to-year. Massachusetts does this by looking first at achievement scores, and then, using specific formulas to compare scores and year-to-year growth, identifying the schools and districts are just not improving. The schools that are categorized in the fourth tier of the framework are designated as “underperforming” schools.  Those schools are required to build three-year turnaround plans and the Superintendent is given the authority to, amongst other things, reallocate funds within the school budget, expand the school day or lengthen the school year and limit or change provisions of the existing contract to support the plan.

Although MA’s intervention framework and plan were just launched in 2010, Massachusetts Governor Deval Patrick recently celebrated the fact that two-thirds of the schools categorized as “underperforming” have already shown impressive increases in student achievement since last year. Governor Patrick noted, “It is clear that low performance is not pre-ordained. When school districts take on the status quo, they are able to secure better outcomes for students.”

Next Steps for Connecticut

Connecticut has a lot to learn from these states about different and innovative ways to structure a statewide plan for identifying and turning around our lowest-achieving schools.  What all three plans have in common is a clear process for classifying schools based on student achievement and growth, defining intervention authority for the lowest tiers in the framework, and holding both the state and the district accountable at each level. It’s time for Connecticut to “go to school” on these successful models and start generating some positive outcomes of its own!