What is a low-achieving school and what are the lowest-achieving schools in Connecticut?  It’s a common question that we hear at CCER.  Unfortunately, there is not a simple answer to that seemingly simple question.

The CT State Department of Education currently uses two different metrics to categorize schools by academic performance. Metric #1.  The first metric Connecticut uses comes from a Federal No Child Left Behind (NCLB) provision, and is used to determine if a school or district makes “Adequate Yearly Progress” (AYP). The goal of NCLB is that 100% of students will be proficient in math and reading by 2014.  It’s simple enough to demand that schools improve adequately each year, but establishing an annual standard for what AYP actually is – that’s a little complicated. In Connecticut in 2011, a school has made AYP if approximately 90% of its students and subgroups meet “proficiency” levels in math and reading on standardized assessments administered in grades 3-8 and 10.

Metric #2.  Connecticut’s State Department of Education (SDE) also uses another metric to determine which schools are “Persistently Low-Achieving Schools.” This metric identifies the lowest-achieving 5% of Title I schools, as well as the 5% of secondary schools that are eligible for, but do not receive, Title I funds.  These schools are measured based upon 3-years of proficiency data in Reading and Math on the CMT and CAPT. A flaw in the SDE’s methodology is that it averages three years of proficiency scores rather than measuring year-to-year growth in proficiency. 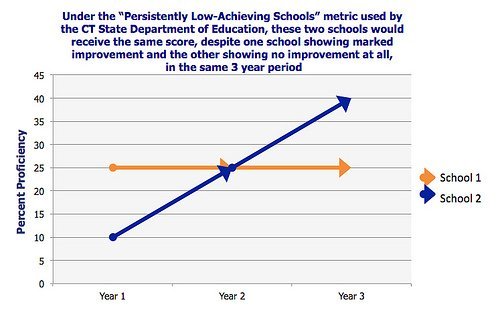 And we don’t think that’s right. If we are measuring “persistent” low-achievement, we should be distinguishing between schools and districts that are improving and those that are not.

Because CT doesn’t have a growth-model that uses a number of different academic indicators to track district and school improvement or failure over time, it is difficult to identify which schools and districts in CT are consistently the “lowest-achieving” and require additional intervention from the state.  Until CT develops such a growth-model, we’ll continue to use the two metrics above to refer to “low-achieving schools” as schools that are either: (1) “In Need of Improvement” for 5+ years or (2) “Persistently low-achieving.”